WAKEFIELD — Joe Carriere takes a blank piece of wood, rock or glass and uses his tools, his talent and his time to create just about anything you could possibly imagine.

But filling the blank slate in his digital marketing program was a bit of a challenge, one that the Wakefield businessman wasn’t sure he had the resources to tackle.

Thanks to some help from the Wentworth Economic Development Corporation (WEDCO) and another local business, Lakes Region Customs is building an online presence that showcases the fine craftsmanship created in Carriere’s shop.

Truthfully, for Carriere, it all started as a hobby, but when his fine craftsmanship started turning heads with his neighbors around Wakefield, he began to branch out and Lakes Region Customs became a fine retirement business.

Carriere notes that his father and uncles all built their houses together and as a kid, he helped out and learned along the way, but it wasn’t until he started spending time with neighbors on Pine River Pond in Wakefield that he started putting some of those woodworking skills to use.

“The neighbors had a game called ‘Pegs and Jokers,’” Carriere said, noting that he took the board and copied it, using a saw and drill press to make the holes. From there, he built a template and used a CNC (computer numerical controlled) router and a business was born.

“Tons of people on the lake, they play this game,” Carriere said. “So, I started making them and put them for sale.”

From there, word grew and he started making other wood products, including custom signs and cribbage boards, using wood that is harvested locally and sawed locally as well.

“It was all word of mouth at first, then I started putting things on Facebook,” Carriere stated. He joined a Facebook group that promoted Wakefield businesses and members met at the Poor People’s Pub to network. Then came COVID.

While plans are still in place to get together again, it became obvious that with large gatherings not in the offing, Carriere still had to get word out around the area.

“When we can, we’re going to have another social event and open it to the public so all the vendors can show their wares,” he said. “It’s our way of letting the community know we are here.”

The retired US Air Force veteran explored the option of purchasing a demonstration laser, which would allow him to do etchings not only on wood, but on glass and stone as well. While it was determined the market interest was there, the volume likely was not going to be sustainable for an expensive machine without a proper presence on the internet.

And that’s where WEDCO came in. Carriere notes that Nichole Hunter, who is active in the Explore Moose Mountains group, let him know that WEDCO offered grants that were IT based and thought this would help him in his search for an online presence.

WEDCO was awarded a USDA Rural Development RMAP (Rural Microentrepreneur Assistance Program) grant last year to provide technical assistance grants and one of its main purposes is to help small local businesses develop an online presence. Lakes Region Customs worked with MoxDog Media Solutions, another local Wakefield business, to set up a domain name and a web site that worked. MoxDog has been working for more than 17 years to help businesses with their web site development and design, social media management and search engine optimization.

“I sent (WEDCO) my business plan,” Carriere said. “I want to be the local guy, but eventually, the market saturates, which forces you to look outward.

“The problem with Facebook is just because I post it, doesn’t mean that you see it,” he added.

Along with his nephew, Michael, Carriere has worked with his new laser to start creating more and more options for people who are searching for that perfect custom-made item. After talking with the customer and figuring out what they want, the two come up with a design on their computers and put the laser to work creating the piece.

“It’s been fun,” Carriere said of his small business adventure. “And I was lucky to find WEDCO and MoxDog to get it to the next level.”

“I want to be the high-end quality guy, but at a reasonable price guy,” Carriere said. “It’s great driving around the community and seeing my work on display.”

In addition to the wooden signs and game boards, Lakes Region Customs also creates clocks, cribbage boards and even advent calendars with space to include “nips” for the adults to enjoy. On the glass and slate side of things, scenes and names can be etched into glassware, slate clocks and coasters and granite cheeseboards and trivets.

“Everything starts with a blank piece of wood and you can turn it into anything you want,” Carriere said.

With WEDCO’s help, Carriere is turning Lakes Region Customs into what he wants it to be.

Those interested in checking out what Carriere has to offer can visit: lakesregioncustoms.com

Anyone looking for more information on the services that WEDCO can provide to the community, can visit wedco-nh.org to find information on grant and loan programs, business advisors, etc. WEDCO’s office is located at 15 Varney Road in Wolfeboro and can be reached at 569-4216 or tagrants@wedco-nh.org. 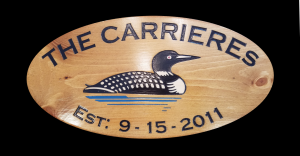 LAKES REGION CUSTOMS creates signs like this one, custom designed to the customer’s liking.

THE BASEBALL (left) and Pegs and Jokers game boards created by Lakes Region Customs are just a small example of the work the company does.