SANDWICH — Who says you can’t go home again? Parker Hansen has found that coming home may be just what he needed, and it turns out that the Wentworth Economic Development Corporation (WEDCO) was able to help make that happen. 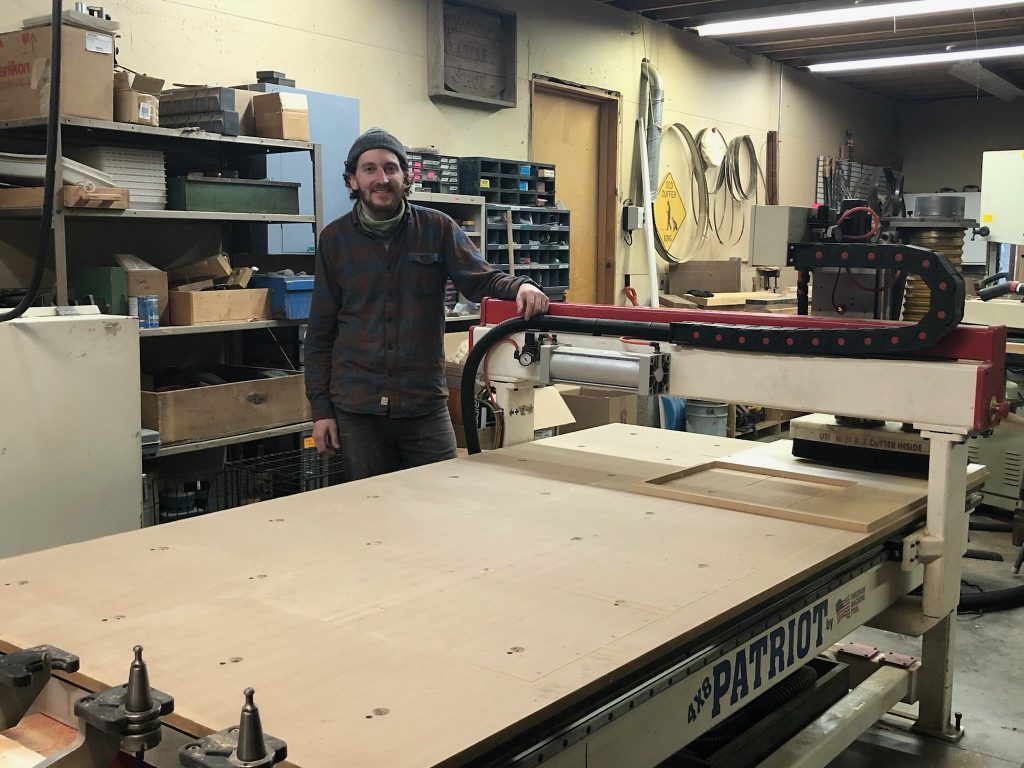 PARKER HANSEN poses with the CNC machine that he purchased with the help of a loan from WEDCO. Hansen is the owner of Lower Corner Millworks in Sandwich.

Hansen, the owner of Lower Corner Millworks in Sandwich, grew up in the small town, the son of two small business operators, and dreamed of getting out and seeing other places. And he did that, most recently ending up in Portland, Maine, where he was working at a cabinet shop, eventually working his way up to a production supervisor. “But last summer, I wanted to move back,” Hansen said. “This was where I wanted to be.”

As word got around town that Hansen was thinking about starting a new cabinet making business in Sandwich, local companies reached out about wanting to do business and it was obvious that this could be a successful venture.  He secured a little space in a spacious barn where his father had once done his own cabinet work. Hansen notes that his father actually lost part of a finger on one of the machines that is still in operation in the shared space.

And with the help of WEDCO, he was able to get his business up and running with the purchase of a CNC machine, which allows him to program what he wants cut right into his computer and the machine just goes to work. He approached a local bank about the possibility of a small business loan and as it turns out, the person he spoke to at the bank was active with WEDCO and pointed him in that direction.
And the connections continued, as WEDCO Executive Director Denise Roy-Palmer was also in a Sandwich business group with Hansen’s mother.

WEDCO was able to provide Hansen with a loan that allowed him to secure the purchase of the CNC machine as well as other shop supplies and expenses, making Lower Corner Millworks a reality.
And with the machine in place, Hansen was able to start filling orders for some of the things that people had contacted him about, including signs for the Rockywold Deephaven Camps and chair pieces for the Shaker Furniture Company. “The Shaker Furniture Company was on board right away, I had work before I even had the machine,” Hansen said. He also pointed out that he has contract with a few different gift shops to do coasters, cutting boards, signs, trays and other wooden products.

Hansen has also enjoyed going around to the different lumber operations to find different types of wood, which he then brings back to the shop to use. And Hansen wasn’t done with WEDCO, as the local organization was also able to set him up with a USDA-RD RMAP Technical Assistance Rural Development Grant, which Hansen used to purchase Quickbooks for his business and also use local accounting firm Leone, McDonnell and Roberts to help navigate the tax world as a small business.

“They are there for me when I need to file my taxes, which is going to be a huge help,” Hansen noted. “As well they are going to assist me when it comes time to provide quarterly financial statements to WEDCO. It’s pretty awesome how significant that grant money is when it comes to the financial side of my business. I’ve had nightmares about filing my taxes as an LLC and they’ve given me a lot of encouragement going forward.”

Hansen is excited about the new direction he’s heading and excited about Lower Corner Millworks and is grateful to WEDCO for making his dream of his own company a reality.

“Without WEDCO, this wouldn’t have gone as smoothly,” Hansen said. “The dream wouldn’t have become a reality as quickly as I’d hoped. “I will go out of my way to tell anyone about them, to talk them up,” he said. “They came through in the clutch.”

As his young puppy quietly chewed on a toy at his feet, Hansen noted that owning your own business certainly has its ups and downs, but WEDCO has helped to make more of the ups. “It’s been quite a ride so far,” he said.

Lower Corner Millworks is located at 317 Wentworth Hill Road in Sandwich and can be reached by e-mail at ParkerLCM@gmail.com or 986-8391. The shop is also on Facebook, Instagram and
Etsy for those interested in seeing some of the work that Hansen is doing.

WEDCO’s service area includes the communities in southern Carroll County and northern Strafford County. Anyone looking for more information check out the rest of our website where the
grant and loan applications are available. WEDCO’s office is located at 15 Varney Road in Wolfeboro and also can be reached at 569-4216 or e-mail tagrants@wedco-nh.org.